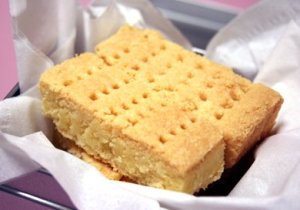 In 2013, I published my Scottish nana’s shortbread recipe on my old author blog. It received thousands of visits and was even featured on the Today Show’s food blog as an heirloom recipe.

I had shared the family recipe my mother gave to me in 1985, for my wedding shower, the only recipe I had ever seen or used while she was still living. It called for one cup of butter.

My mother kept a decades’ old recipe box, covered in contact paper. A few years earlier, I’d packed it away when my sister and I moved her things out of her apartment and moved her to a nursing home. I didn’t have the stomach to look through at the time. In 2016, after my mother passed, I finally opened her own recipe box. While thumbing through all the index cards tucked inside, I found a different version of a shortbread recipe, one that called for one pound of butter.

That’s a difference of two whole sticks of butter.

See, a few years before I got married, my mother suffered a brain abscess and a massive stroke that took some of her mental and physical faculties. She may have copied the recipe for me to the best of her ability at that time, but for the rest of her life, the abscess put her at a disadvantage because of the brain damage she suffered when the doctor tried to remove it.

Since my Scottish grandmother is long gone, I don’t know which recipe is correct. I have made shortbread with 1 cup of butter my whole life. It tastes too buttery with a whole pound, but since my mother wrote that recipe card before her stroke, I fear that may be the original. So, start with 1 cup butter and add by the quarter cup as you see fit. It shouldn’t be too crumbly or it will fall apart when you try to cut it.

Mix well and knead thoroughly. Add more flour or butter if needed. The more you knead, the tastier the shortbread will be.

Pat the dough into a round, square, or oblong pan (don’t roll it or grease the pan; the dough is rich enough). Prick with a fork all the through, top to bottom, in a design if you can.

And of course, no post about Scottish food would be complete without invoking Robbie Burns’ famous blessing:

Some hae meat
by Robert Burns